The Eagle Talon! What a crazy road this car has lead me down. When I started this project, one of the main objectives was horse power. As the years have passed, I have realized other objectives, such a reliability, are needed to provide that power. This is the path that I took…

Blowing Up The Motor

I had the ECU installed in the car before I had the engine rebuilt. This let me push it pretty hard with just a few modifications. As a result of me pushing the car pretty hard, a bearing for the crank shaft was destroyed. This was also probably lack of a proper tune and proper maintenance.

Believe it or not, my plan included blowing up the motor. I was fortunate enough to have only destroyed the main bearing and crankshaft girdle. The block, head, and valve train were all still in tact and could be reused. I had Jacks Transmissions reassemble the valve train and do some special modifications to the oil squirters and crankshaft girdle to prevent crank walk. They also machined the head and torqued it down to my block which had a fresh set of rings, pistons, and rods installed. 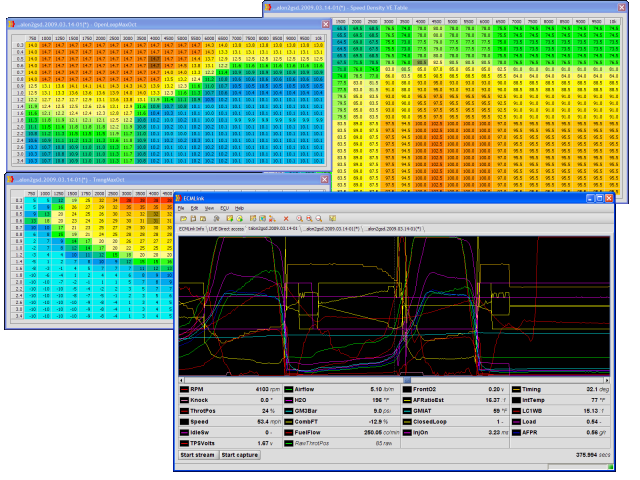 The guys over at ECM Tuning have an awesome ECU for these cars. I decided to setup the car with a speed density intake system. There are a few requirements to pull this off:

So long as the system can read an intake air temperature and the atmospheric pressure, the ECU can make an educated guess about how much air is entering the system. With a bigger intake, the new one comes in at 4 ” O.D., more fuel is needed. I purchased a set of 4 1150cc injectors, and obviously we need something new to provide all of this fuel, hence the Walbro 255 fuel pump.

A Holset HX35 taken from a 2001 Cummins diesel. A BULLSEYE Power turbine housing replaced the stock HX35 housing, and allowed the turbo to mate nicely with the new exhaust manifold. Building the custom return line for this thing was, and has been a pain. AN fittings along with some braided steel hose helped to create the oil supply line. An oil pressure sensor for the turbo was also created at this junction.

I found that with the fuel pump, and just a few extra guages, my battery system was struggling. This actually took a little bit of time to get right, but if you read carefully, and find what other people have done, it is actually really easy to get this done.

Through all of this, I had forgotten that this rather large turbo is going on a rather small engine. 2.0L is not a lot when thinking that this turbo was designed for a 5.9L V8. We are trying to pack the same amount of air fuel into 1/3 the space. This creates A LOT of pressure. I have installed oil catch cans for my PCV lines, and even purchased a custom oil cap to help alleviate the pressure seen in the valve cover.